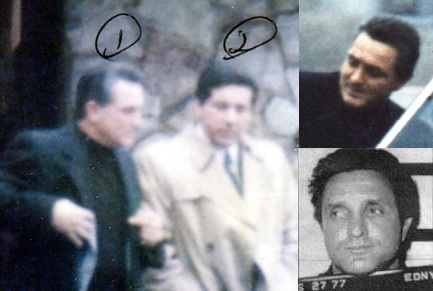 Vittorio “Vic” Amuso’s reign over the Lucchese mob family has been one of pure terror, mostly for members of his own Borgata, as he ordered scores of his soldiers and captains whacked. His murderous rule has ensured his place at the head of the table, though, as he remained the official boss despite serving a life sentence.

Born in Canarsie, Brooklyn, a few years after the end of the infamous Castellammarese War, which laid the foundation for New York’s five Mafia families, Vittorio Amuso found himself growing up surrounded by tough Italian mobsters at the peak of their powers. He inevitably was in awe by what he saw and began doing the things a teenager does when he wants to impress a certain group. In this case, Amuso got involved in crime.

The Mafia noticed the young wannabe gangster and nurtured his talents. He eventually joined what was known as the “19th Hole Crew,” which was run by Christopher “Christie Tick” Furnari, a capo in the Lucchese crime family.

As an associate of this crew, he met and became very close to Anthony “Gaspipe” Casso. Amuso and Casso formed a natural partnership and were a two-man crime spree during the 1970s and 1980s, involved in anything from fraud and extortion to gambling and drug trafficking. In 1977, both men were caught up in a heroin bust involving the Sicilian Mafia and a pipeline from Thailand to the United States.

They were also part of a highly professional burglary crew known as “the Bypass Gang,” which broke into banks and jewelry stores in Manhattan and Long Island. According to estimates the gang made off with over $100 million in stolen merchandise.

The mob loves good earners and Amuso was definitely that. But in order to become a true force in the Mafia, one has to make his bones, as they say. He has to commit murder on behalf of the organization. At this, too, Amuso excelled. Whenever Furnari needed someone dead, he’s send out Amuso – or Casso, or both – and that person would not be breathing the next day.

With a fierce reputation for violence and an ability to make millions of dollars for the mob, the pair rose up the ranks. Casso became the right-hand man of Furnari as he became the family’s consigliere, while Amuso was promoted to capo of Furnari’s old crew. A nice bump, but within a few years, they would rise even higher.

In 1986, Lucchese crime family boss Antonio “Tony Ducks” Corallo summoned Amuso and Casso to meet with him to discuss the future of the family. Corallo – along with his underboss “Tom Mix” Santoro and consigliere Furnari - would soon be spending the rest of his life in prison after having been found guilty in the Commission Case and he was seeking the right person to replace him as head of the family. His eye had fallen on Amuso and Casso.

Though some later came forward with information regarding that meeting, it is unclear what exactly was said. One thing, however, is certain: Afterwards, Vic Amuso was the new leader of the Lucchese crime family, with Casso functioning as his underboss and consigliere at varying times during the following years.

Amuso’s reign was pure terror. His actions caused many soldiers and captains to defect and become government witnesses. Though some will say it was “Gaspipe” Casso who was behind the murderous decisions, Amuso still had to sign off on them. And there is clear evidence he was as much a part of the slaughtering as Casso.

Cosa Nostra things, important things. Things like who gets the power. Who gets promoted. Who is right and who is wrong. And, more importantly, who gets killed.

Read: The Evil That Men Do: The Killing of Robert Kubecka & Donald Barstow

But all those bodies started to attract the attention of law enforcement. As did all the Lucchese turncoats who began telling authorities everything they knew about the group’s illicit business dealings. One by one they defected: Alphonse D’Arco, Pete Chiodo, members of the family’s New Jersey crew.

In 1991, prosecutors finally hit Amuso and Casso with racketeering charges. By then, both men had already gone on the lam, hiding out somewhere to wait out the storm. They had been tipped off about the coming indictments by corrupt law enforcement sources.

Despite the fact that they were on the run, Amuso and Casso maintained firm control over their family and frequently visited associates in New York. They also set up a prearranged telephone system to communicate with underlings using anonymous payphones.

One day in the summer of 1991, Amuso was on his way to such a public payphone to call home and see what’s what. As he arrived at a Scranton shopping mall, he was closely watched by FBI agents. Once he picked up the phone and dialed the number, they swarmed on him and placed him in handcuffs.

By January of 1993, Amuso was looking at life in prison after having been found guilty of the racketeering charges he fled from. At age 81, he is still serving his time. Despite his time locked up and away from the streets, he remains the Lucchese family’s official boss, with all the respect and reverence that come with it.