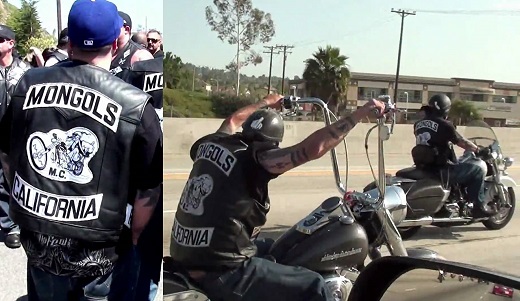 Daddy ain’t happy. The Mongols motorcycle club in the United States has kicked out the majority of its European chapters in “bad standing,” Dutch weekly Panorama reported this week. American Mongols MC leaders ordered emissaries from several of its European countries to get their act together. Displeased, the American bosses then decided to expel them from the club.

Quoting anonymous sources, Panorama reports that emissaries from the Mongols in Germany, England, Italy, and the Netherlands were called to account by their bosses in the United States. The Americans ordered their European brothers to pay higher membership dues and to retaliate at once when they were subject of an attack by a rival motorcycle club.

What were the Europeans going to do? Their origin was in the United States. It’s the birthplace of all the big outlaw biker clubs. Still, the Europeans thumbed their noses at the bosses, leaving the Americans no other choice but to kick them out in “bad standing,” Panorama’s anonymous sources say.

Leaving an outlaw biker club in “bad standing” isn’t a good farewell. It means these bikers have to hand in their colors (vests and other materials, sometimes even their motorcycles) and remove any tattoos on their bodies. It’s a nightmare for men who seem like giants when they ride their bikes wearing their colors. Suddenly, they are just like everyone else.

Perhaps that is why the story takes a twist. The president of the Mongols chapter in the Netherlands posted an official statement on his Facebook page in which he wrote, “On September 24, 2016, the Mongols chapters in Europe have unanimously decided to go on independently from the Mongols in America. England, Belgium, France, Italy, Germany, and the Netherlands will continue the Mongol Nation in Europe. Each country individually, but united under one European flag visible on our side rocker.”

The German Mongols later have a change of heart and decide to stick with their American mother chapter, which welcomes them back with open arms. The Germans are listed on the Mongols MC's official website. This causes an immediate rift with several of their European brothers.

It’s the second time such a thing has happened. In December of last year, Gangsters Inc. reported about the American Bandidos severing ties with all its European chapters and creating a new patch as a result. Despite all the tough talk surrounding a “bad standing,” it would be impossible for the American mother chapters to enforce the rules in Europe.

And thus, we are left with two versions of the same outlaw motorcycle club. One in the United States, the other in Europe. These splits signal that the days of a united brotherhood that spanned the globe have come to an end. Today, it’s each chapter for itself.