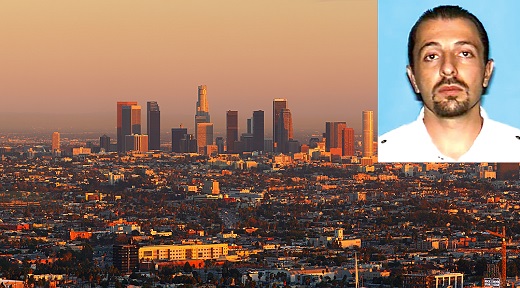 It ain’t easy being a gangster in Los Angeles. The City of Angels is known as the birthplace of many notorious gangs like the Crips, Bloods, and La Eme. African-Americans and Latinos rule the streets where gang shootings are an everyday occurrence. Surprisingly it was this hostile environment that gave birth to Armenian Power, a gang comprised of white Eastern Europeans with influence reaching far beyond the streets of L.A.

When the Armenian Power gang was founded it had just one simple reason for existence: Protect Armenian youths from other street gangs roaming the schools and streets. According to evidence presented in court, “Armenian Power formed in the East Hollywood district of Los Angeles in the 1980s. The gang’s membership consisted primarily of individuals of Armenian descent, as well as of other countries within the former Soviet bloc.” One of the group’s founding members was Mher Darbinyan (right), who molded the youth gang into a formidable street gang with circa 250 members as he himself transitioned from teenager to adult. While doing so he also changed the group’s modus operandi. Where they had first protected fellow Armenians from rival thugs, now they preyed on them, extorting their businesses and using threats and violence to assert control of the neighborhood called “Little Armenia” for its many Armenian immigrant settlers.

Members of Armenian Power were involved in extortion, robbery, kidnapping, and fraud. Money was pouring in from all angles as the gang grew in stature and started making friends in high places.

Though most criminals rather not think about it, there is a good possibility they will end up behind bars during their hunt for fast money. Once inside, they lose the protection their gang offers them on the outside. When that happens new friends are needed.

Darbinyan realized this and forged an alliance with La Eme, a California prison gang also known as the Mexican Mafia. They control much of the narcotics distribution and other criminal activity within California’s correctional facilities. La Eme would protect Armenian Power members and associates who were behind bars, while Armenian Power gangsters on the outside would help facilitate Mexican Mafia criminal activities.

Darbinyan is rumored to be so close to La Eme, federal officials say, that he became one of the Latino gang’s few white members.

Besides locking down California’s prisons and Los Angeles’ streets, Armenian Power (below) also sought to expand its international influence. They worked closely with powerful organized crime figures in Russia and Armenia, men known as “thieves-in-law,” who are the equivalent of the Italian-American “made” guy. They are hardcore old school Russian Mafia. With great power comes great responsibility. Cheesy, but true. And something the leaders and members of Armenian Power seemed to forget as they let the power get to their heads. All it takes is one informant and all that power becomes as useless as a Spiderman comic book in a gunfight.

Law enforcement is always on the lookout for emerging criminal gangs, but it takes something special for authorities to take action. That is why it’s advisable to keep a low profile when involved in expansive and lucrative criminal rackets.

However, when you’re on top of the world, making millions of dollars hand over fist, have frightened people kissing your ass wherever you go, you might think you’re bulletproof or, better yet, “indictmentproof.”

And in the underworld there simply are times when you are put to the test on both accounts. If you want to be the baddest crew on the block then you better put your guns where your mouth is. Sometimes a gangster just can’t keep a low profile. Sometimes he has to go full Tony Montana “Say hello to my little friend”-mode on his rivals.

Mher Darbinyan and his goons in Armenian Power understood this all too well.

That is why members of Armenian power pulled out their weapons and started blasting when an argument between them and another California gang turned ugly on the streets of North Hollywood. Two of their rivals were killed as Armenian Power members fled the scene of the crime.

The shootout in May of 2008 proved their ruthlessness, but it also painted a large bull’s-eye on the gang’s back. Law enforcement and the FBI were now giving the group their full attention. The clock was ticking.

Darbinyan and his posse of thugs, however, had no clue yet as to the impending doom. Armenian Power members relished in squeezing their fellow countrymen for money. Through the use of intimidation and violence they usually succeeded in hitting jackpots. They would kidnap people off the streets and demand ransom money from their loved ones. Most Armenians paid up rather than going to the cops for help.

What Armenian Power was doing, in essence, came down to “shitting where you eat.” Founded to protect fellow Armenians, the gang was now feasting on them in a blood-soaked buffet. And whenever you shit where you eat, your food is going to get toxic.

In 2009, they kidnapped Sandro Karmryan, an Armenian businessman who shipped cars to Russia. For the poor man it was a horrible case of déjà vu as he had been kidnapped by Armenian Power before. That time they had released him after his family coughed up $50,000 dollars. This time things didn’t go as smooth. If getting kidnapped for a second time wasn’t enough bad luck, Karmryan was also shot by a friend while running away from his would-be kidnappers.

What happened next is described perfectly by journalist Hayley Fox in her in-depth article about Armenian Power. “For nearly five days, he was moved from stash house to stash house as the kidnappers used his debit card to withdraw money from ATMs across Southern California. His ransom was set at $1 million, a fee they hoped his family in Russia would pay, [Assistant United States Attorney Martin Estrada] says. But his friend's gunshots had torn through Karmryan's abdomen, causing his intestines to rupture and leak fluid into his body. He was vomiting stool and bleeding severely internally, Estrada says, when the FBI tracked Karmryan to a marijuana grow house in Mira Loma. They found him in agony, blindfolded on an air mattress, with a pit bull standing guard over him.”

He eventually survived, but the trauma surgeon who operated on him later testified that he had never seen something like it. The gunshot wound had been festering for five days and was now a fountain of liquid stool that erupted from his stomach because of all the pressure that was building up.

You can only apply so much pressure. Whether it be to the human body or the human mind. At one point all this pressure reaches a peak point after which exploding is all that is left. Victims can only be scared shitless for so long. Eventually they will seek help from a force able to take the fear away. A force dressed in uniform and armed with guns. A force that outnumbers any gang in the United States.

One such desperate victim had taken out a loan with the gang only to realize he would never be able to pay back the interest. It’s a common technique used by organized crime, perfected by La Cosa Nostra, the Italian-American Mafia. Armenian Power bled the man dry for everything he had. Then they asked for more, and more, and more still.

He walked into the offices of the FBI a broken man and offered his services. He had no other way out. He was terrified to his bones that Armenian Power would harm his family or himself. He had heard it all. At one point Darbinyan told him, “You are lying. I'll jerk off on the liar's mother's head.” Another member told him, “I will skin you ... if that deposit does not happen by 6 o'clock. I will not give a fuck. Good luck to you.”

With the FBI in his corner he was able to make his payments while also gathering intel on the gang’s activities for his FBI handlers. By then the Bureau already had wiretaps in place and was collecting invaluable information about a wide variety of crimes. That is how they were able to save kidnapping victim Karmryan in 2009.

By 2011, they had enough evidence to charge 90 Armenian Power leaders, members, and associates in two separate indictments. Of those 90 charged, 87 have been convicted. Furthermore, they seized more than $3 million in fraudulently obtained luxury automobiles. And they interfered in several violent confrontations between rival groups, arresting more gang members and seizing firearms.

Among the convicted Armenian Power gangsters is their leader Mher Darbinyan. At trial he was convicted of 57 counts for his role in a racketeering conspiracy that included extortion, bank fraud, and a sophisticated credit and debit card skimming scheme. In this fraud scheme Darbinyan used middlemen and runners to deposit and cash hundreds of thousands of dollars in fraudulent checks drawn on the accounts of elderly bank customers and businesses. Separately, he also organized and operated an elaborate debit card skimming operation targeting customers of 99 Cents Only Stores across Southern California. This scheme involved the installation and use of skimmers to steal thousands of customers’ debit card numbers and PIN codes.

According to Agent Jeremy Stebbins, who worked the case out of the FBI’s Los Angeles Office, “With the arrests and convictions of nearly all senior leadership of Armenian Power, we dealt a serious blow to their ability to continue to operate in the manner they were accustomed. We also sent a message to the Eurasian organized crime community that they are being targeted and watched.”

Behind bars Darbinyan is no doubt mulling over all his bad decisions, but must also be somewhat pleased about just one decision he made years ago: His pact with the Mexican Mafia. Because for the coming decades he will probably need their protection in the California penal system.