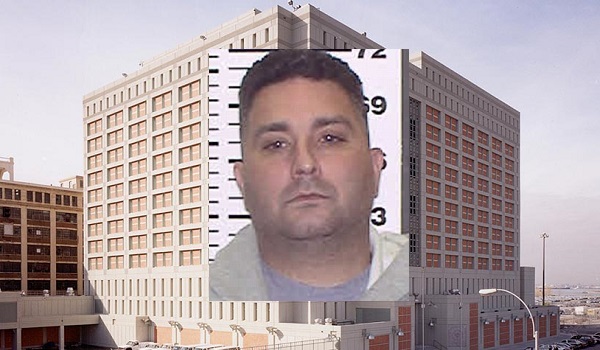 He’s a wiseguy who took his flossing seriously. Christopher Londonio, an alleged soldier in New York’s Lucchese crime family, was charged Wednesday with planning to escape from the Metropolitan Detention Center (MDC) in Brooklyn using dental floss, sheets, blankets, and a saw blade smuggled into the facility by a priest.

According to prosecutors, the breakout was concocted somewhere in June, by 43-year-old Londonio and another unnamed detainee. The imprisoned mobster used dental floss as a cutting tool to tamper with a window in the center. He also planned to solicit a priest to smuggle a saw blade into the facility, and secretly stockpiled a large number of sheets and blankets, intending to use them as a rope to aid in his escape.

As usual when it comes to these high-profile Mafia busts, the plan was foiled after a fellow detainee reported the escape plan to authorities.

“Although sounding like a script for a made-for-tv movie, the charges allege yet another serious federal crime against Londonio,” Joon H. Kim, the Acting United States Attorney for the Southern District of New York told the press. “As alleged, with this latest chapter in his years-long life in the mob, Londonio adds to the string of crimes he must now face, in a criminal justice system he was desperately seeking to escape.”

Londonio has been detained at the MDC since February 2017 in connection with murder and racketeering charges pending in White Plains federal court. He was among nineteen members and associates of the Lucchese La Cosa Nostra family charged with racketeering, murder, narcotics offenses, and firearms offenses.

Authorities have charged Londonio with the murder of drug boss Michael Meldish, a former leader of the infamous Purple Gang in New York which had longstanding ties to New York’s five Mafia families. Many of the current mob bosses started out as members of the Purple Gang. Londonio is also charged with playing a role in the shooting of Bonanno family soldier Enzo “The Baker” Stagno.

He will be arraigned on the new charge at the next pretrial conference, which is currently scheduled for September 20, 2017. The attempted escape charge carries a maximum prison term of five years. Londonio is represented by his lawyer Charles Carnesi.