“Joey No Socks,” the persisting rumors about Donald Trump and the American Mafia and whether they matter 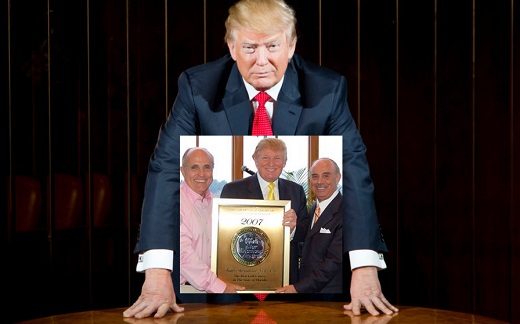 Donald Trump and the mob, the rumors persist and the video footage keeps rolling in. As the clock struck midnight and the crowd at Trump’s Mar-a-Lago estate celebrated the new year, the president-elect had just received the One-of-a-Kind bronze Eagle award from a man known on the streets of New York as “Joey No Socks,” a convicted felon who at one time was tied to the Gambino crime family.

“Joey No Socks” officially goes by the name Joseph Cinque and has come a long way since his days as a mob wannabe. Standing beside Trump that festive evening, he is now known as the man behind the American Academy of Hospitality Sciences, an organization that hands out awards for hospitality to various businesses, but especially to those owned by Trump, who himself is listed as the organization’s “ambassador extraordinaire” on the company website.

It has the serious smell of conflict of interest. For many businessmen, however, it is simply business as usual. Trump and Cinque are no different. Although, media reports claim, Cinque is not your usual businessman. In 1980, he was shot three times by an unknown assailant in what police said looked like a gangland hit attempt. He’s a “small-time mobster, a scam artist and an art fence,” a 1995 New York Magazine article about Cinque read. It claimed Cinque “used to be friends with [Gambino crime family mob boss] John Gotti.”

Big allegations. In the world of fake news one also has to wonder how a reporter can go from “small-time mobster” to “friends of mob boss John Gotti” in the space of just a few lines? Was he a small-time crook or did his influence reach all the way to the upper echelons of the New York Mafia? Choose, you can’t have it both ways.

At Gangsters Inc., we tend to believe Cinque was just a hustler. “His criminal history includes arrests for grand larceny, criminal possession of stolen property and insurance fraud,” UPI reported. Out to make a buck, he scammed and scrambled. He pleaded guilty to felony charges related to possessing art stolen from New York’s Center Art Gallery in 1989. Police found the stolen pieces in his apartment.

On New Year’s Eve, this same hustler made his way to the podium to hand out an award to Donald Trump, president-elect Donald Trump, and to bask in his glorious, presidential limelight. Cinque’s closeness to Trump immediately brought up the never-ending discussion about Trump’s alleged mob connections. Was this not more proof?

Well, no, this was not. Just like his attendance at a past WWE event alongside Robert LiButti, another alleged mob associate, did not offer substantial evidence of his close ties to the Mafia. They remain rumors. Merely evidence that Trump knows a lot of people with shady connections. 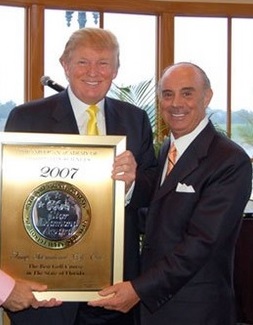 It depends on how far you are willing to take it. President Barack Obama is friendly with Jay Z, a self-proclaimed street-hustler who dealt drugs and committed other criminal acts before turning his life around to become a successful rapper and entrepreneur. Is Obama’s connection to Jay Z a bad thing? Most would say it isn’t because Jay Z is currently a music superstar and his criminal past is far behind him.

Why then make a fuss about Trump and “Joey No Socks”? A criminal past isn’t always an issue, apparently. Attacking Trump on being friendly with a convicted criminal would be hypocritical.

The difference between Jay Z and Joseph Cinque (photo right, next to Trump), however, is that Cinque and Trump share a business connection. Both profit of each other’s actions. Trump profited from Cinque’s awards, while Cinque profited from Trump’s name and current election as president. That makes this past New Year’s Eve a bit awkward. These questions about conflict of interest that are much more persistent than the rumors about Trump’s mob connections.

While the focus remains on Trump’s alleged past mob business ventures and friendships, it should be placed on his possible conflicts of interest. Perhaps we’re out of focus because we’ve become glazy eyed. We’ve seen the picture so often; our eyes have become tired. That picture? Powerful politicians – both Democrat and Republican - hanging out with businessmen, hustlers, and convicted felons, smiling and laughing, thanking each other for favors asked and given.

It’s the way politics is done. Back in the day, mobsters like Charles “Lucky” Luciano and Frank Costello walked into the offices of powerful politicians and got things done the way they wanted, nowadays it’s Big Business flexing its (financial) muscle – and with Trump, perhaps also a guy nicknamed “Joey No Socks.”

The rumors persist and, if true, they matter. But what matters most is whether or not the future president will be immune to the wishes of his former associates – both with and without a criminal past - and whether he will choose the American people over all others.

With Trump’s enormous business empire spanning the globe, it will be hard for the president-elect to prove he’s on the side of people. He needs to distance himself from his business interests. If he doesn’t, people might get the idea that he’s just using them as another pawn in his own personal corporate version of game of thrones. And that would be much scarier than any Mafia connection from his past.

There is no doubt about it,President Trump has a very shady past.His dealings with the Genovese family is fairly well documented.If there is evidence enough to put him on trial on a RICO indictment,then so be it.

throw the stones in the air and see where they land !